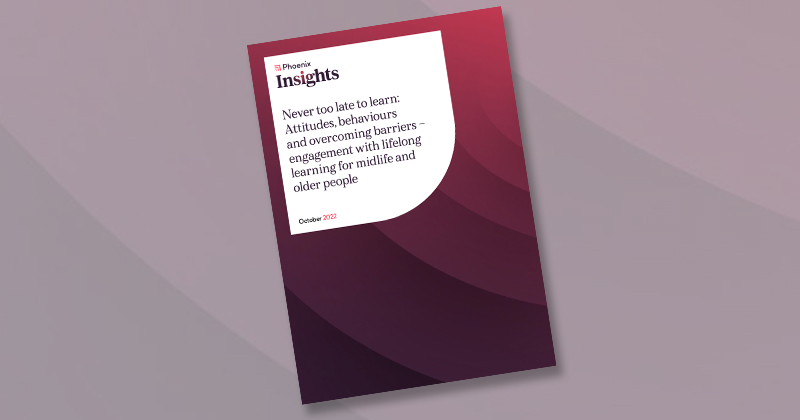 More from this theme

The government should reframe the language and branding of Lifetime Loan Entitlement (LLE), as researchers have found the term Lifetime Loan to be unappealing to potential learners.

Thinking group Previews of Phoenix published research exploring the challenges people face retraining throughout their lives and found that the main reason is that adults don’t want to take on more debt.

He warns that because of this, the government’s proposed Loan for Life (LLE) entitlement will require ‘targeted adjustments’ to incentivize middle-aged and older workers to take out loans to retrain.

The LLE, which should be deployed in 2025, will provide individuals with the equivalent of four years of post-18 education to use throughout their lives. Funds will be available to study at levels 4 to 6, both for modular and full-time study at colleges or universities.

A decade of decline in adult learning is the driving force behind the scheme.

Phoenix Insights research, conducted by Public First, found that lack of knowledge about how loans work and the benefits of retraining are major barriers to overcome.

The think tank said the Department for Education should explore ‘creative ways’ to highlight financial incentives for mature people to engage in lifelong learning, including including alternative or additional means of financing LLE.

Although the report’s authors said they did not expect the government to provide a grant for 100% of the costs, they believe ministers could introduce “partial grants or bursaries/grants for providers or employers, especially in areas where skills are lacking”.

“There is precedent for this approach in sectors such as the NHS and teaching (for example, NHS scholarship and funded teacher training places),” the report said.

Phoenix Insights also called on the government to review the language used when discussing learning opportunities for adults of different ages.

He found that words such as ‘apprenticeship’ and ‘internship’ have ‘strong associations with low pay and ‘starting from the bottom’ – thus reframing opportunities to build on coaching preferences such as ‘ ‘upskilling’, ‘upskilling’ and ‘on-the-job training’ will help give middle-aged and older people more confidence to engage.

A renaming and rebranding of the LLE scheme to put it in a “more positive framing” has also been suggested, after the term “loan for life” was “widely viewed as negative and unappealing”.

The report added that having the program “too closely associated with the government was also seen as negative”, so the policy “will have to be applied in an impartial and independent manner which prioritizes the choice of the learner”.

Phoenix Insights also said that specific information about the quality and outcomes of courses available to adult learners to support them in their careers – including potential new career paths or the number of vacancies available related to the qualification being studied – will be vital.

“Middle-aged and older people view retraining as a ‘risk’ or ‘gamble’ and need to know what they can expect if they pass a course – the presence of a ‘safety net’ “as well as whether the course would be ‘worth it’ both financially and otherwise (e.g. a guaranteed position or a commitment to progress in their current role),” the report states.

Reza Schwitzer, Associate Director at Public First, said: “Our research shows that while people like the idea of ​​lifelong learning, they don’t like the idea of ​​a lifelong loan. The fear of taking on more debt will be a huge barrier for mid- and late-career workers who adopt LLE, which is why we believe there should be clearer guarantees of job and career progression. for anyone retraining through the program.

“With a few targeted tweaks, the LLE can become an essential tool to help the over-40s make the change they need to earn more, work longer, and contribute to a productive growth economy.”

A DfE spokesperson said: “From 2025 our LLE will provide individuals with a loan equivalent to four years of post-18 education to be used flexibly throughout their lifetime. We consulted on the LLE earlier this year and continue our ongoing engagement with the sector. We will publish our response in due course. »

Congress Provided $30 Billion in Emergency Student Aid, What Have We Learned?

Pakistan only received $2.234 billion in loans from international lenders in the first quarter