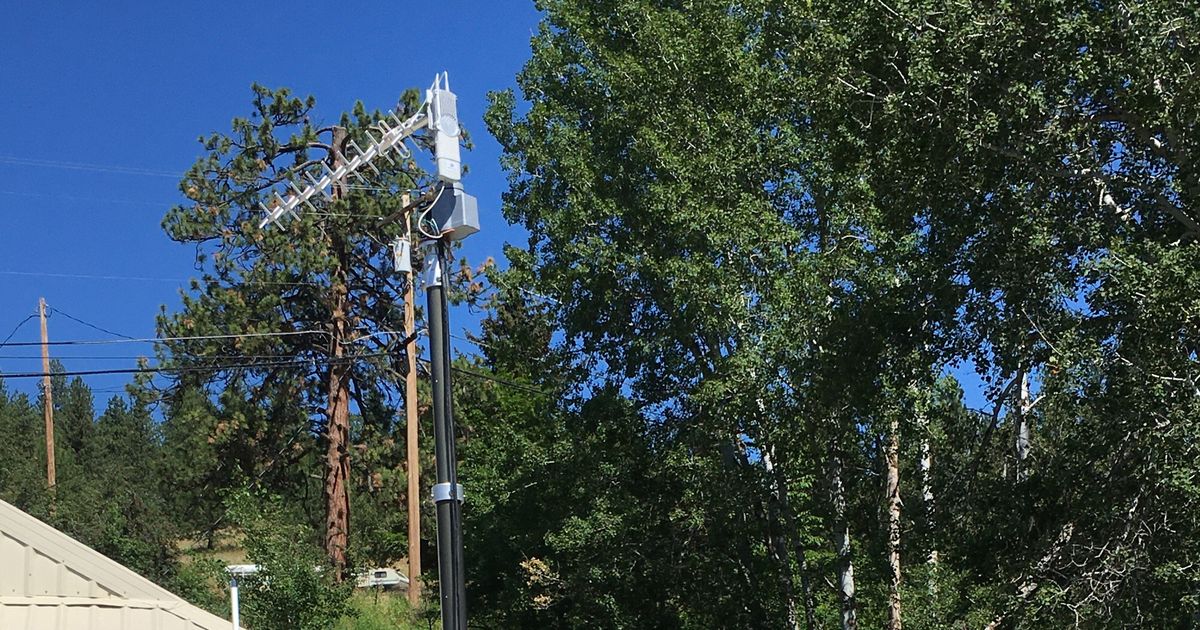 REPUBLIC, Wash. – For crews battling wildfires in remote areas like Ferry County, real-time communication to and from the front line is vital. A new invention developed by Washington State University Extension in Ferry County can connect emergency responders to high-speed internet in off-grid areas and during power outages.

The nomadic broadband unit uses a satellite to connect to the Internet. Mounted on a trailer, the device can be towed by a van and can operate autonomously for up to 45 days, powered by solar panels and a backup propane generator.

“There is so much potential for a unit like this,” said Steve Bonner, Ferry County Emergency Management Director. In rough terrain where coverage is patchy, it could be used to relay information between firefighting camps. It could also be used for a mobile medical facility, real-time traffic monitoring, and other disaster relief efforts.

The project is a collaboration between Ferry County, WSU Vancouver, the University of Washington and Microsoft. Their team tested the unit during a demonstration in the Colville National Forest last week.

“We’ve all seen how important internet connection is when we talk about online schooling and learning,” said Mike Egan, director of Microsoft TechSpark, a program that aims to foster economic opportunity through a partnership with rural communities. “We talk about job creation, how to create economic stability through connection, but nowhere is that more important than during emergency disasters and during some kind of real need. This kind of punctuality is so important.

Funding from Microsoft and the Washington State Department of Natural Resources kicked off the project in 2018. A 2022 grant from Microsoft funded the construction of the final prototype.

The Broadband Unit is much more than just an Internet access point. It is a multi-faceted communication hub with radios, weather station, drone docking station and remote control camera.

Ferry County Commissioner Nathan Davis, a hands-on hobbyist inventor with a background in information technology, designed most of the unit while working with college students and professors to develop the software. “It’s a fun project for me,” he said.

He recognized the need for better connectivity after a wildfire in 2015 caused a power outage. “We were unable to communicate out of county for almost half a day,” he said.

“There are very few public servants we meet in the United States who have both the technical know-how and this technological gift to be able to do this alongside their jobs,” Egan said of Davis.

A satellite dish mounted atop the trailer accesses the internet via Starlink, a constellation of satellites operated by SpaceX.

The unit has two extendable masts with different functions. The taller 18ft mast contains a backup internet antenna and wireless access point. Wi-Fi has a radius of 600 feet and can support over 100 devices.

“A fire camp could essentially have 24/7 communication without having to worry about it,” Davis explained. “They can communicate with the family, with headquarters.”

The shorter 12ft mast contains a camera with LED and infrared floodlights. At night, the lights can illuminate a range of 200 feet. The 360 ​​degree tilt, pan and zoom camera can be controlled remotely from anywhere in the world. This makes it possible to monitor fires or floods and quickly issue evacuation notices if necessary.

The weather station can help assess fire conditions with a particle scanner that measures smoke or dust levels in the air.

A large rear-mounted LED TV screen can be used for video conferencing, displaying messages or mirroring any device.

An expandable solar panel follows the sun from east to west, charging the batteries during the day. The generator starts when the batteries are low.

The team continued to add features over time.

“As long as you have electricity and the internet, you can add so many different things,” Davis said.

This is the team’s second prototype. The first unit occupied an RV with truck bed, with an office inside. It worked, but it was hot and cramped. So they redesigned it to be smaller and more accessible, starting the second prototype in February this year. Eventually, they plan to develop a unit that can be carried in a backpack.

Other mobile units like this exist on the market, but the cost is prohibitive from $100,000. “Communities like this cannot afford this,” said Trevor Lane, director of WSU Ferry County Extension. “They can’t even think about it.”

The prototype costs about $40,000 in parts, software and labor, Lane said. “It’s about affordability, accessibility and adoption.”

WSU Extension will share the plans for free on the open source hosting site GitHub.

“People can pull the documentation, the inventory list, the schematics, the blueprints,” Lane said. “They can read about it, study it and then they can build their own.”

While WSU Extension in Ferry County owns the prototype unit itself, they plan to loan it out locally when needed.

“We’re just beginning to realize the Internet of Things that goes with it,” Lane said.