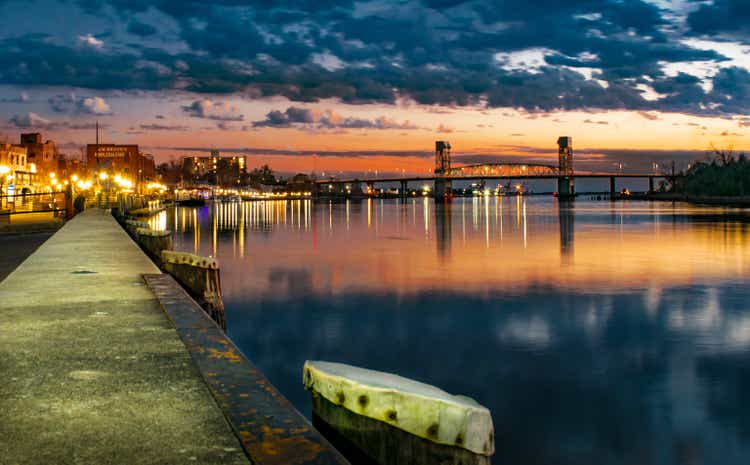 There’s a lot to love Live Oak Bancshares (NASDAQ:LOB) long-term. Banks with highly tactile service models and differentiated lending specialties typically do better than average, and Live Oak’s adoption of technology-enabled banking could be a major differentiator over time. In the short term, however, I’m concerned about owning a liability-sensitive bank during a period of Fed tightening, let alone a heavily leveraged bank for small business lending when the economy cools.

The valuation is interesting. My long-term discounted cash flow model suggests double-digit long-term annualized total return potential, but approaches based on short-term multiples (P/TBV and ROTCE-based P/E) are much less accommodating. , with the shares trading at a premium during a time when many other growth banks (is West (EWBC), Signature Bank (SBNY), and SVB Financial (SIVB) among others) are trading at high single-digit forward P/Es.

Live Oak’s reported basic earnings per share were weaker than expected (by about $0.03/share) in a quarter when most smaller banks beat expectations, but results were significantly lower. better at the pre-provisioning level, and given Live Oak’s historical credit quality, I’m not concerned about higher provisioning (especially given strong loan growth).

Revenue increased 12% year over year and 11% quarter over quarter on a basic adjusted basis. Net interest income rose 26% year-on-year and 5% quarter-on-quarter, beating expectations by about 1%, or $0.015/share. Net interest margin declined 15bps yoy and 5bps qq to 3.84%, about 10bps better than expected, while earning assets increased 5% qoq. Adjusted net interest income was up 32% quarter-on-quarter, outpacing 24% and driving up approximately $0.11/share.

Operating expenses were up 30% YoY and 6% and were a little higher than expected, but still beat based on the efficiency ratio (65.7% vs. 69.2 %). Earnings before provision fell 12% and rose 21% quarter-on-quarter, beating nearly 20% to $0.12/share. The provisioning took $0.20/share off earnings versus expectations, but Live Oak also saw a much lower tax rate in the quarter.

Live Oak does not operate a traditional branch structure and collects deposits via the Internet. Non-interest bearing deposits make up an insignificant share of total deposits, and Live Oak has to compete aggressively for deposits – while some banks pay more for CDs (Allied Financial (ALLY) and Capital one (COF) among them), Live Oak is right up there at 3.75% on year-to-date CDs.

This is my biggest short-term concern with Live Oak. In the absence of a basic deposit allowance, Live Oak is liability-sensitive, meaning its net interest margin is expected to decline as interest rates rise. The bank has outperformed this quarter, and management has headed towards the top of its NIM range for Q4, but I’ve been pretty consistent in forecasting higher than expected deposit betas for this cycle, and I think Live Oak might have some vulnerability here.

I’m also a bit concerned about the short term for lending. Live Oak has built its business around small business lending to niche verticals through a high-touch model, but I’m concerned about the risk of weaker loan demand over the next 12-18 months, so as businesses face higher rates and greater uncertainty about the economy.

To be very clear, however, this is a short-term concern. Longer term, I think small business lending is an attractive market for Live Oak because many large banks don’t handle small business customers particularly well and smaller banks struggle to compete on quality of service . I love the company’s high-touch model (a model used successfully by companies like First Republic (FRC) and Summit (PNFP)), as well as the company’s ongoing efforts to develop technology-enabled banking services, including integrating banking functionality into ERP software packages used in its targeted specialty verticals.

I’m not worried about credit quality here. More than 40% of the bank’s loans are guaranteed by government organizations such as the SBA, and since 2012 the bank has accumulated a total of $56 million in net write-offs against $19.6 billion in loans. In this context, I think the bank’s 1.2% reserve position is good, and I’m not concerned about credit quality or capital adequacy here.

As the bank grows, it is likely to exceed what SBA loans can provide, but by building these specialized verticals, the bank should be well positioned to expand without too much trouble into C&I loans and more conventional CREs. Also, I think tech-enabled banking is going to become the norm, and that’s going to make life difficult for smaller banks that don’t have Live Oak’s understanding of fintech and the capabilities it’s gained through fintech partnerships.

I expect double-digit growth in long-term core earnings from Live Oak, and managing that growth will create challenges for the bank, but I’m also using a higher discount rate here than I’m would do it for First Republic or a more conventional bank like PNC Financial (ANC).

Shares of Live Oak have significantly underperformed over the past year as the market bails out both growth and liability-sensitive names. Even with this underperformance, however, the valuation call is complicated. If my long-term core earnings model is correct and Live Oak can deliver double-digit long-term core earnings growth and low double-digit ROE, these stocks should generate an attractive long-term annualized return. in mid-adolescence. . On the other hand, accurately modeling interest rates beyond a year or two is exceptionally difficult, let alone other bank income items.

Short-term approaches are not so accommodating. Short-term ROTCE in the 12%-13% range only gets me to the current stock price on a P/TBV basis, and although a forward P/E of 13x on my estimate FY23 EPS is not bad relative to growth, many growth banks are now trading at single-digit forward P/Es. I could argue that Live Oak should be trading closer to $40, but sentiment for banks is weak now, and it’s harder to make the case for a premium for a liability-sensitive small business lender in a cycle of tightening.

Investors willing to accept and look past the short-term risks that Live Oak’s spread income could underperform on higher-than-expected filing costs and sentiment could worsen further might like what they find here. At a minimum, I think it’s a name to keep on a watchlist, but I think it may be early to establish a full position.